Much has been written about the recent announcement of Yahoo’s decision to acquire Tumblr. Here are my two cents in a more than two lines.

As with any acquisition, the key question has always been – will it add value? One of the best ways to look at value addition in an M&A is synergies among the merging firms in the value-chain.

For the value chain, I decided to refer to a different perspective – The Internet Value Chain (from the ‘Internet value chain economics‘ proposed by Mark Page & Christophe Firth from ATKearney back in 2010). I did this more so because Yahoo and Tumblr are primarily internet-companies – with lots of online-properties and services!

The Internet-Value-Chain talks about the path travelled by “data” and the value added to it at various junctures – from origination to consumption!

The figure below indicates that Yahoo (depicted by “Y”) is present in multiple stages of the value-chain – content generation, online services and enabling technology services – a common occurrence in this value-chain and in this industry. 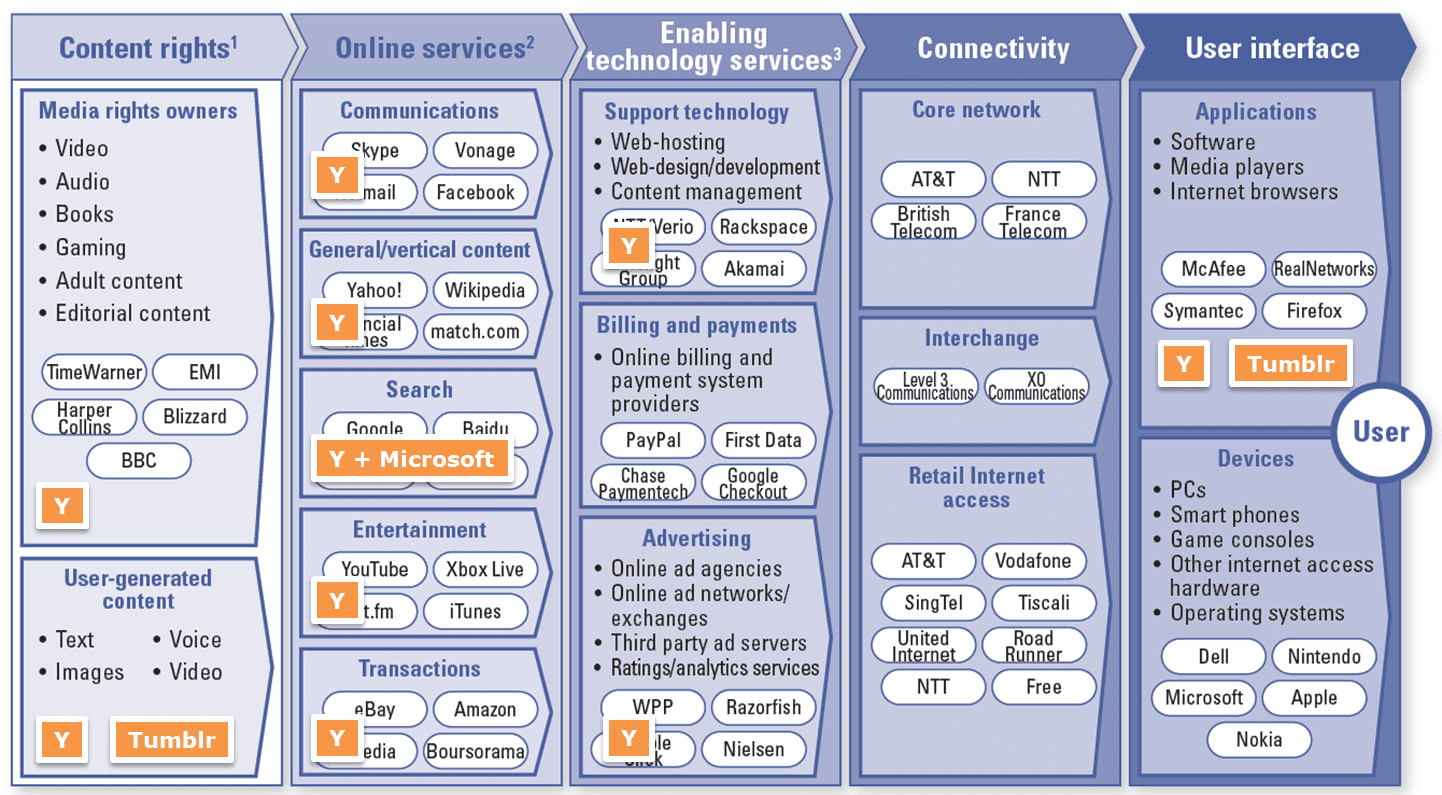 Yahoo & Tumblr – A place on the Internet value Chain

Tumblr, on the other hand, is primarily a part of the “User Generated Content” box of Content Rights and the User Interface-Applications! It goes to show that Yahoo’s interest in Tumblr is primarily in the user-base and audience of Tumblr and in reusing its mobile-app development capabilities. In the recent past, Tumblr has added advertising to monetize its content base – this is still in a nascent phase.

Tumblr’s revenue sources pre-acquisition are the advertising clicks, premium blog themes and premium blogger accounts (say those hosted by companies looking for greater visibility). Yahoo also relies heavily on advertising revenues – driven by display ads on its online properties and those driven by its search collaboration with Microsoft (an alliance reportedly not doing too well).

What is Yahoo’s strategic interest in Tumblr?

Why is Yahoo interested in Tumblr? Yahoo is faced with two issues with respect to its service (online properties and ad-revenues):

Yahoo’s latest acquisitions indicate an attempt to bridge the gap in the ‘App Store’ eco-system.  Can Tumblr assist here?
Tumblr’s mobile app is rated higher than any of Yahoo’s apps on the iPhone (An almost similar situation in the Android platform). Yahoo itself has been revamping several of its mobile apps to gain traction here.

Secondly, its user demographics – An aging client base alienating advertisers

Yahoo’s current demographics suggest about 50% of its traffic comes from audience < 35 yrs. In case of Tumblr the same segment comprises 72% of the total traffic. If time was to freeze and users were to remain completely loyal to the platforms, Yahoo can pull up the 50% figure up to 58%!  (Referred from here & here).

Looking to bridge these gaps, Yahoo will have to work around several challenges with this acquisition.

The integration challenges ahead!

While Yahoo will hope to exploit these synergies steam through; there are more challenges ahead with respect to the strategy, product integration and economic value extraction.

Although Tumblr’s mobile app is an advantage, it is ranked much lower than that of the likes of Facebook, Instagram & Twitter. On handheld devices – the merger will help improve the situation – raise it closer to competitive parity – but will not win it the game!

On the demographic front too, the hope to raise share of the young audience to 58% – rests on a big assumption of user loyalty. I have attempted to plot the relationship between the percentage of young users (< 35 years of age) leaving Tumblr’s platform and the resulting impact on Yahoo’s users resultant demographic mix (depicted below)

In light of the recent introduction of advertising to monetize Tumblr’s platform, it is noteworthy that users have been happy with non-intrusive advertising. Integrating with Yahoo and starting a display-advertisement model like on other online Yahoo properties could potentially see users rushing out of the door – bringing Yahoo back to the demographics problem.

Tumblr’s themes will bring insignificant share of revenues and advertising revenues will meet a steep curve (ads prices on mobiles are cheaper than on desktops). Are the ad-revenues from premium bloggers enough to sustain valuations?

Coming down to the moolah! Tumblr reportedly spent $13 million in operations in 2012 while its ad-revenues were about $25 million. This is an unfavorable ratio accompanied by an unknown source of confidence in the projected $100 million revenues for 2013.

From Yahoo’s perspective, where’s the money coming from? Financial reports suggest a free cash flow reserve of $150 million – and reports say that Yahoo will mostly pay in cash for this $1.1 billion acquisition. There are indications of cash infusion from a stake sale of Alibaba which may be used to fund the Tumblr acquisition.

The question remains – in light of the strategic challenges involved and the best-possible value extraction toward competitive parity – is it the best use of this cash?